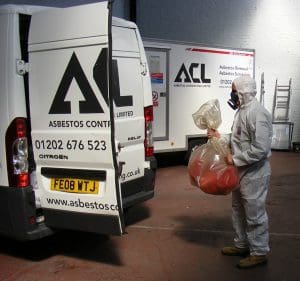 At ACL we provide comprehensive and competitive asbestos removal and safe disposal service in Weymouth. We can carry out asbestos surveys and asbestos testing on the domestic and commercial property including garages, textured coatings, insulation boards, roof sheets and more! Asbestos has been used for more than 2000 years and in the UK along over 1 million buildings contain asbestos material. In the UK between the 1950s and the mid-1980s asbestos was used in a wide variety of products such as thermal insulation, fireproofing, electrical insulation and building materials. Even up until 1999 some asbestos products were still being used. The period in which the material was used the most was during the 60s and 70s, any commercial or industrial building that was either built or extensively renovated would more than likely contain asbestos in some form or another.

The reason why you have to get all of the asbestos-containing materials removed from your premises is that it can cause four different diseases and asbestos is responsible for 4500 deaths each year according to the HSE. We can also perform a survey on your property to locate and describe all of the ACMs in the area that is being surveyed. These surveys are called management surveys and refurbishment & demolition surveys. The management survey is a standard survey to find the presence and extent of any suspect ACMs in the building which could be damaged or disturbed during normal occupancy. Then the refurbishment and demolition survey is used when your premises is going to be refurbished or demolished and must be completed before any work is carried out. It will locate and describe all ACMs within the area that is being refurbished or in the whole building if it is going to be demolished. The survey will be fully intrusive and involves destructive inspection, as necessary to gain access to all areas.

Get in contact with us if you are in need of our asbestos removal in Weymouth.